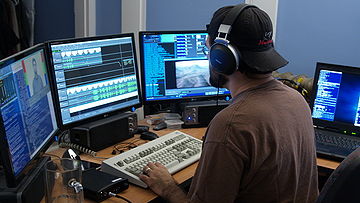 The clearly best way to do this would be to put a transparent canvas layer over the video window and implement completely fresh controls. This would probably give the most bug-proofness/future-proofness and definitely give the most consistent look/feel across browsers. I also estimate it would take several weeks of full time scripting to make it work as expected (remember, HTML5 is new an still draft, so there are endless inconsistencies and implementation bugs to deal with. Writing a script is easy and fast. Making it work consistently is time consuming and frustrating).

subtitles.js is an updated version of jQuery.srt that loads and parses SRT format subs on demand from any URL, and places the text of the each subtitle into a <div> element in synchronization with the video playback timer. A little additional CSS is all that's necessary to but a translucent background behind it, and display it over the video frame.

...not as gratuitous as it seems, many assumptions about how video is made and presented assumes viewing in a relatively dim environemnt, where the video being watched is the brightest thing in sight. Xiph's web styling uses white backgrounds, which I found actively distracting and out of place, but altering the style of the site for just the video pages also seemed wrong. So I added what I was worried was a gratuitous animated dim/undim on playback/pause (instantaneous dim/undim was jarring). In retrospect, I'm now convinced it was a good call, assuming it actually works everywhere as intended (it won't work on browsers using the Cortado fallback).