Firefox can play videos from local storage too, if the file has proper extension. Both ".OGG" and ".OGV" are accepted, since 4.0 also ".WEBM", but for example ".WEB" will not work.

Watching the clip in 480p quality works fine when watching from the very beginning, but when seeking to an unloaded scene, playback is very poor (Firefox 3.6.13, Windows XP Pro, 2.59 GHz CPU, 1.75 GB Ram here). Workaround: Pause the video and wait for a few seconds until pressing play again. 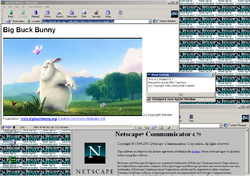 As of 10.63, controls are visible even with JavaScript off, fully working for WebM, but for Theora only sound volume and already played time indicator do work, there is no total time and no progress / seeking. Opera can't play videos from local storage, only from the Internet if properly embedded in HTML5. There are tiny buffering / smoothness issues if CPU performance is insufficient to play in real time.